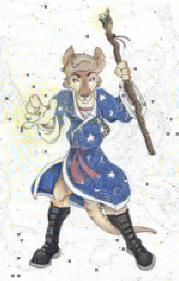 
HE:
Doesn't know where
he's from. Neither does anyone else except maybe his mentor and teacher Fyry Fyang the firey ferret sorceress, but she's not saying.
Was raised by Foxes in the small kingdom of Midgardon, at The Crossroads Inn.
Has traveled all over the three countries of:
Haven = a well ordered Theocracy ruled by Dillard All Mighty a Dalmatian. All the towns are called "Haven in/on/by the ...". The capital is Haven in the Clouds a sky borne castle and town. All weres must put on a collar when entering Haven that prevents them from changing and marks them as 'outsiders'. Canines get better treatment in the Havens.
Hel = a chaotic mish mosh of towns, cities, seaports, forts, castles, nomadic tribes, and a vast underfed underpaid army led by Rippers Dad, Ahyrrad-tee-neow "THE GENERAL". Fyry Fyang being the most powerful magic user could be said to be the Empress but she's not really into administration and hardly ever interferes. In a deep cavern in the southern mountains legend says there's a Black Dragon who may be the true ruler of Hel but no one ever sees Him or Her. On the south coast is South Baston where Ripper's from. On the east coast is the immense and ancient city of Lin Nai {rhymes with 'tin eye'} where Moldred learned magic. On the north west coast is North Baston a sprawling seaport where Sneak-sneak grew up on the docks and aboard ships.
Midgardon = a peaceful little kingdom between Haven and Hel. Where moldred grew up and came back to live after seeing the world. His foster family the Volpones {vole ponies} run the Crossroads Inn smack dab in the center of the country where the north-south road from Safe Harbor to the capital of Brook Lined Heights meets the east-west trade route from Haven to Hel ( the road to Hel is broad and flat and easy to follow while the road to Haven is narrow, hard to see and full of thorns) Moldred lives in the Forested Hills, in the mid west of the country, in a modest (6 room) stone cottage owned by the Crown.
The continent in question looks somewhat like a moose head with Midgardon being the smallish head itself and Hel comprising the east antler and Haven the west.
At one time or another Moldred has been to almost every corner of all three countries. And never found any place better than home; and home ain't all that hot!
From the day they met Phyrrt and Moldred have felt like they've always known each other.
Where ever he is, he usually thinks how nice it would be to be somewhere else.
Has one true love Vivica Volpone his childhood playmate and sweetheart; who loves him but is always off somewhere trying to run a hotel and support her family.
No mater how much he complains really likes going on quests for the Queen; Catherina The Cosmopolitan (Catty) to 'pay his rent'
While in Lin Nai found and read some rare books that taught him special skills and then disappeared.

He can:
Stop and reverse time for fifty feet, for up to fifty minutes.
Teleport himself and up to fifteen people and or large objects (clothes and small stuff just comes along) fifteen hundred feet.
By using a special intonation in his voice get almost anybody to follow one non fatal order (only one and it can't be "kill yourself" or others)
Convince just about anybody that their life is crap and they could do a lot better (very effective on guards and assassins)
Using a wand (green stone at tip) draw a door way in any wall.
Using a wand (red stone in tip) erase any door way.
Using a potion make a metal object burst into flames and get red hot.
Using a potion make wood melt and run like water for ten minutes then 'freeze' in shape.
Wants to know:
who he is?
Where he's from?
Are there any more like him. In all his travels he has never meet another Thylacine and wherever he went people wanted to know what he was. They'd never seen his like. Non moles from Vanaheim don't even think he's "Fenris Volf"
Can a tiger/wolf find true happiness with a flying fox (the first story will include how Vive gets wings) and what would their kids look like?

Has had some sexual experiences; but not that much.
Doesn't 'do it' with his apprentices! Well, hardly ever! Because it would interfere with their studies, His role as teacher, theirs as student. Plus he's pretty faithful to Vive (and she to him)

Did make love to both Ripper and Sneak-sneak and watched them do each other one time in Haven when they all thought they were going to die at dawn.
Fyry Fyang may have been his first lover, but neither of them talk about it much.
Shirley Goodness a were - martin (though she claims to be a real big mink) spy for hire; seduced him on his way home from Lin Nai and says he's the father of Mercy; who does have his stripes but on a weasel body!
Has more respect for Princess Patricia the Prepared (Patty) than for her older sister Cattay. Patty strayed home and managed the kingdom while Catty Toured the Courts of Haven, Hel and far off exotic lands. Patty was the regent for many years when Cattay disappeared on the way home to their father; King Phillip's funeral.

gets drunk three times a year:
On his and Vive birthday (not knowing his real day of birth Verony said "let all three get a party on the same day")
On New Years Eve.
On Peace Day (the day Haven and Hel agreed to stop marching across Midgardon to war on each other)
The rest of the year he only drinks "third-eye Tea" a herbal tea that boosts brain power.
always prefers to talk his way out of trouble than resort to fighting, and usually can.
Cats other than R & S refer to him as a wolf/dog thing
Dogs refer to him as a cat like critter
Functions best at dusk and dawn
Not much into exercise but sometimes ranges for miles into the woods lost in thought.